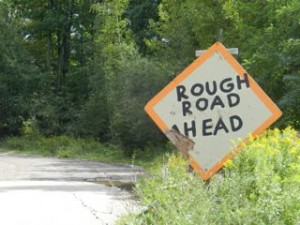 Tropical Storm Irene made a perfect entry into Vermont and left in her wake a storyline that will be playing out for a long, long time.Torrential rains overwhelmed the terrain upon which they fell. Mountains funneled water to brooks and those brooks became raging powerful rivers. The rivers they replaced, in turn, streamed over their banks creating floods the likes Vermont hasn’t seen since the Hurricane of 1927. For those of you math challenged like me, that is 84 years. Almost an entire century ago.

I have spent a fair amount of time volunteering my efforts this past week with the Red Cross helping staff a shelter in Barre Vermont for those forced into homelessness. I’ve seen firsthand their faces and listened to their stories while eating dinner with these unwilling residents. Trying my best to imagine to feel their disruption and dislocation. For some, their homes are destroyed beyond all repair.

I met Thelma, an extraordinary 88 year old woman who spent two days sleeping in the back seat of her car with her cat. Can you imagine your mother or grandmother having to do such a thing?

I’ve chosen Waterbury as my town to focus upon with manual labor. Being a grunt to any homeowner or businessowner that raises their hand. So much to be done… And winter’s on the way… There’s no time to waste. I helped clear a random woman named Cathy’s antique 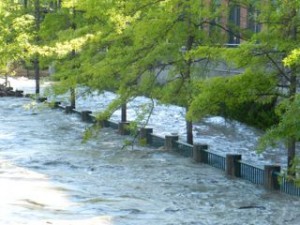 store of its inventory and then power wash all the silt off each piece with my friend from Burlington Betsy who answered my call (you rock Betsy!) for volunteers on Facebook. We washed out the building as Winooski River silt streamed from between the wooden panels of its walls. This gray matter silt is frickin’ everywhere.

And then there’s the bakery in Burlington named August First. I approached its owner, Phil, asking if he’d be willing to make extra loaves I could bring to Waterbury residents and to the Red Cross Shelter. He was not only willing but he was already sending loaves of his delicious bread to the Rutland Food Shelf, an area hit particularly hard by the storm. He had tried to reach the Waterbury Food Shelf days earlier but the building was submerged and currently abandoned with no one to answer the phone.

The grim facts are out there. Several fatalities. Hundreds of roads washed out. Entire towns rendered isolated with no way in or out except for the ’round the clock efforts of The Vermont National Guard airlifting supplies of all kinds by Blackhawk helicopter. Power lost for days. And on and on it goes…

The volunteer efforts of those like me is an amazing story waiting to be told about this tough little state bound by a fierce sense of community. We know the weather and we thrive on it oddly. She binds us. Like it or not.

I will be telling these stories in the coming weeks.

Please come back often to check in.