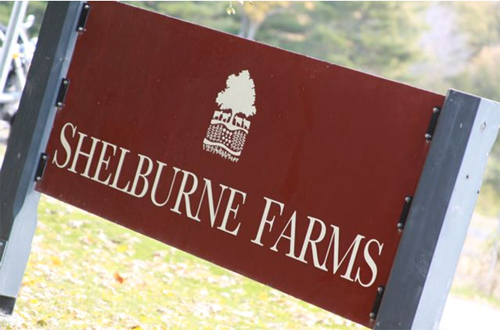 Remember the feeling when you rediscover something or see it in a new way? Remember those feelings? Something is triggered deep within. I had such an experience last Sunday afternoon. I decided I needed fresh air and it had been some time since I had hiked the property at Shelburne Farms. Most the time, I journey to Lone Tree Hill for its unbelievable views of Lake Champlain and the Adirondack Mountains to the west and Vermont’s Green Mountains to the east. (Truth be known it’s one of the very best places to see sunsets and moon rises. A full moon rise over the Farm Barn is a sight to behold.

Last Sunday was cold. A fair amount of biting wind to boot as I crossed the open meadows from the Visitor’s Center en route to the Farm Barn and Loan Tree Hill. There were a few other like minded souls out and about exchanging warm, friendly smiles. Economy be damned I thought.

As I reached the granite bench atop Lone Tree Hill, the views simply compel one to sit and take stock. In what can be described as a pre-meditative euphoria, I absorbed the churning clouds weaving their way through the Adirondacks’s lofty summits. The clouds were moving at such high speed from the north. A squall line was clearly visible with its accompanying wall of snow advancing across the lake.

I sat and marvelled at the beauty sprawling before me. (Now, this is my idea of sprawl I thought.)

I must have been there fifteen minutes or more. Reminiscing other visits here, to this very spot, within all seasons and weather…

I felt deeply moved in those moments.

I could feel my body responding to the vigorous walk – a bit winded as I took my seat on the stone cold bench. My senses opened by the beauty of the landscapes on display in so many forms. The weather creating its own dynamic energy. All of this I could see, feel, hear, touch and taste.

As the cold from the bench permeated one end of me and the ever increasing winds buffeted another, I felt inspired to continue the journey down unexplored trails and warm up my chilled body. Descending the southwest corner of Lone Tree Hill into the woods, the wind ceased to gnaw. It grew rather quiet. My senses were realingning – once again. Ahhhh. This is good too I thought.

The trail opened up into a meadow with views of the west, the south and the north. Undulating landscapes bordered by trees and forest. What sorts of critters hid from my view I pondered…

Further west, I travelled into deeper snow the result of unused, unworn trails. Ohhhhh, I like this even more. I felt somewhat pioneering.

To my astonishment, the snow squall line seen from above had reached my body. A fiercesome wind and heavy snow stung my face. I shielded my cheeks and eyes from the pounding I was taking. But strangely, it felt good. The snow melting and drooling across my face.

I came upon a building which turned out to be the backside of The Coach Barn, an angle I had never seen before. And there I could see Lake Champlain up close. I continued another one hundred and fifty yards to the lake’s edge where high up on a cliff I could feel the frigid dampness enhanced by the combination of Mother Nature’s forces. I wove my way between various trees, whose names I wish I’d known, for a closer look.

Ice flows hugging the shores, the howling wind, the grayness of it all, horizontal snow, waves crashing against rocks.

I stood there quietly. I was in love.

After five minutes or so, I continued on past the Inn, long closed up for the season. I remembered summer concerts on the lawns there, thunderstorm watching under the south facing portico, my dad’s visits when he would splurge and stay as a guest…

Facing directly north now my cheeks tightened as I tacked into the wind.

Why on earth did this feel so good?

Walking along the access road, past the milking barn, up the hill into the woods, I felt I was living a Robert Frost poem.

Further up the hill and around a bend the Farm Barn came back into view. Frederick Law Olmstead got this place just right.

Call me at 802.238.5256, email me at [email protected] or post your comments at Hurd’s The Word or go to my website at Shelburne Vermont Real Estate.