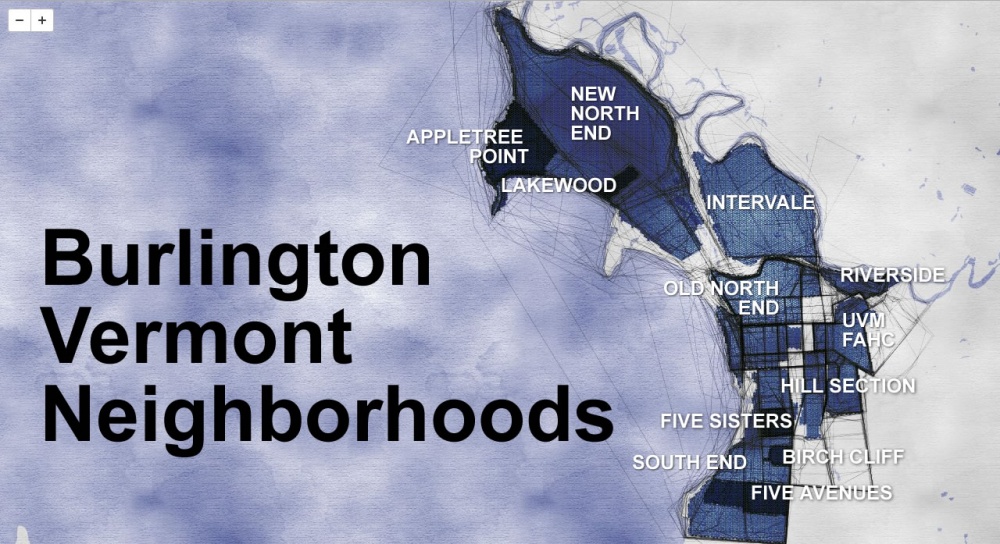 Burlington is the largest city in the U.S. state of Vermont and the county seat of Chittenden County. Burlington had a population of 42,417 at the 2010 census. The city is the hub of the Burlington-South Burlington metropolitan area, consisting of the three northwestern Vermont counties of Chittenden, Franklin and Grand Isle and encompassing the cities of Burlington, South Burlington, and Winooski; the towns of Colchester, Essex, and Williston; and the village of Essex Junction. According to the 2012 U.S. Census estimates, the metro area had an estimated population of 213,701, approximately one third of Vermont’s total population.

A regional college town, Burlington is home to the state’s flagship public university, the University of Vermont (“UVM”), as well as two small private colleges, Burlington College and Champlain College. In early 2015, Burlington became the first city in the United States to run completely on renewable energy.

The state’s largest hospital, the University of Vermont Medical Center is also located within the city limits. Vermont’s largest airport, Burlington International Airport (BTV), is situated in the adjacent suburb of South Burlington, although it is owned by the city of Burlington. (Source: Wikipedia.org)

Burlington has many neighborhoods to explore. The map above shows some of the specific neighborhoods. They are:

No other neighborhood in Burlington Vermont can boast about the infrastructure and amenities that Appletree Point and its Association provide. Not one.

Burlington’s most populous and suburban neighborhood, a northwest elongation/extension of the city, is located at all points north of Burlington High School, and includes North Beach and Leddy Park as well as the Burlington Beltline. It is sometimes referred to by locals as “North Burlington,” owing largely to the neighborhood’s residents being politically and culturally more conservative, relatively speaking, than the rest of the city.

The Intervale cannot be considered a neighborhood but is a large area encompassing many locally owned organic farms and natural preserves along the Winooski River. It is included on this list because its total area is larger than that of most neighborhoods in Burlington.

Burlington’s oldest, most densely populated, and most diverse neighborhood is north of all properties along Pearl Street, west of US Routes 2 and 7, and is inclusive of areas south and east of Burlington College (but north of Downtown and west of the University District)

North of Main Street, east of Willard Street, and south of Riverside Avenue – surrounded on three sides by US Route 2, includes UVM and many once single-family homes converted to student apartments (although these are everywhere throughout the city limits and metropolitan area)

North of Main Street, east of Willard Street, and south of Riverside Avenue – surrounded on three sides by US Route 2, includes UVM and many once single-family homes converted to student apartments (although these are everywhere throughout the city limits and metropolitan area)

Five Sisters is an historic neighborhood in the South End of Burlington, Vermont. There are approximately 300 homes on the neighborhood’s five streets which were completed in the late 19th and early 20th century. According to local legend, these streets were named after the developer’s five daughters, though local historians can neither confirm nor deny such rumors.

In 2006, the Five Sisters neighborhood was named to the “top ten” neighborhoods in the United States by Cottage Living magazine.

The Five Sisters include:

A once mostly industrial, now mostly artistic, district south of Maple Street and west of US Route 7 (Shelburne Street and South Willard Street), includes Oakledge Park and the headquarters of many of Burlington’s nationally known companies like Burton Snowboards and Dealer.com